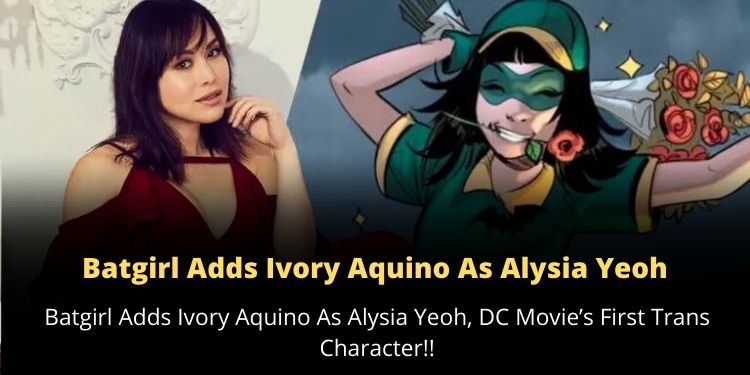 Recently, the fans were mind-boggled witnessing Barbara Gordon aka the Batgirl getting her hands-on ideal superhero costume. So, now she has found her best friend and roommate in the DC live-action movie too.

The new super movie of HBO will be adding Ivory Aquino as Alysia Yeoh as DC film’s first trans character. Here is everything we know.

The DC creators have officially picked Ivory Aquino to play Alysia Yeoh, Batgirl’s best friend in the upcoming live-action HBO and DC feature film. So, she will be the first openly trans character in a DC live-action movie.

The officials have finally made a major announcement on the upcoming HBO and DC venture, “Batgirl”. Ivory Aquino will be boarding in for the featured superhero movie.

Ivory Aquino is perhaps popular for her insane performances in projects like Tales of the City and When We Rise. She has also left a mark with her role as Celicia Chung, a fearless transgender activist featured in an ABC mini-series.

However, Batgirl will be her first project in the DC universe and this will mark the debut of the first openly trans character in any DC live-action project.

Ivory Aquino will get into the shoes of Alysia Yeoh in Batgirl, who will be the best friend of Barbara Gordon and her former roommate, who was first featured in Batgirl Volume 4 DC comic from 2014.

Alysia Yeoh is one of the most interesting transgender characters in a DC comic. Her dream is to be the best chef in the world. However, to earn her bread, she works as a bartender and a painter.

So, it will be awesome to watch how Ivory Aquino takes the role of Alysia Yeoh to the next level with her touch of brilliance.

Batgirl is going to be an upcoming live-action superhero project under HBO. The story is picked up from the official DC comics and it’s curated by Ardian Syaf and Gail Simone. Though the official plot of Batgirl is under the shadow, we have some sneak peeks.

The plot will focus on Gotham City Police commissioner, Jim Gordon’s lovely daughter, Barabara, who will be playing the role of Batgirl. Aquino will take the role of her best friend and will be the first major transgender character to appear in a live-action DC movie.

Grace was the one who leaked the news of Aquino, being a part of DC and HBO’s upcoming project. She posted a photo on her official Instagram handle, tagged Aquino, and dropped the caption, “Barabar and Alysia.” So, the addition of Ivory Aquino as Alysia Yeoh is confirmed.

So, what do you think about Aquino’s addition to Batgirl? Do let us know in the comment box.

Follow us for all hot updates on the upcoming DC series and movies and bookmark our page, so that you don’t miss out on any major news.