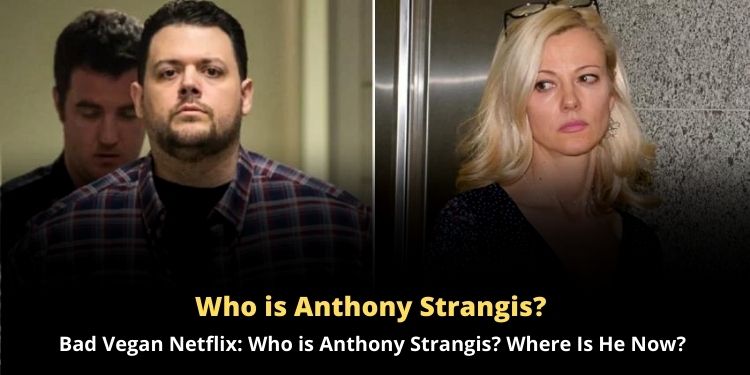 Who is Anthony Strangis? And where is Netflix’s new crime documentary’s popular face now? Here is everything we know.

Netflix is finally here with its latest crime documentary, Bad Vegan: Fame. Fraud. Fugitives.” While two characters Sarma Melngailis and Anthony Strangis are leading from the front, some hot questions are trending on social media from the house of the fans.

One of the most-asked questions is – Who is Anthony Strangis and where is he now? So, Sassyshows is here with the perfect answer.

Anthony Strangis is the ex-husband of Sarma Melngailis, the woman behind Pure Food and Wine. Anthony had experienced a storm of allegations and he also went through five years of probation as he was found guilty for a $1 million scam with his investors.

He was also titled Shane Fox, the man who cheated Pure Food and Wine investors and employees and suffered imprisonment of more than a year.

Sarma in the Netflix project revealed that Anthony was from a military background. While he has suffered a lot in his early life, witnessing scary fights between his parents.

As per the reports, before meeting Sarma, Anthony was imprisoned for impersonating a police official and huge theft.

Where Is Anthony Strangis Now? As per the sources, back in 2017, Anthony Strangis was alleged guilty to “four counts of larceny in the fourth degree.” His offenses included robbing $844,000 from his investors, while he also created his employees and failed to pay them around $40,000. So, he was imprisoned for over a year.

Back in 2018, Sarma decided to part her ways with Anthony and she filed a divorce. So, since then there are no updates on Strangis. As per the official reports, his probation period will be ending in May 2022.

So, now that you know who is Anthony Strangis, make sure to share your views on him, in the comment box.

1 thought on “Bad Vegan Netflix: Who is Anthony Strangis? Where Is He Now? ”