After the recent release of episode 2, ‘sneak attack’ every Attack on Titan fan cannot wait to unfold the third Episode and see what happens with Zeke and Eren. In the last Episode, the paradise military got hold of the situation, and also they were leading the Attack.

Mikasa joined the forces and others to fight with Eren and finally accepted Zeke’s plans. But Attack on titans does not like things to be this simple, Zeke got seriously injured, and there are chances of Zeke screaming and the rest of the Titans getting an awakening call.

The Marley invaders and Reiner want to keep Eren long from Zeke and kill Zeke before meeting Eren. They have successfully injured Zeke, and he is hurt badly, but he is still alive, and Eren is walking towards Zeke. Reiner gets the idea of what Eren is trying to achieve, and he also starts to move in that direction. But what will happen next, and when is the new episode dropping? 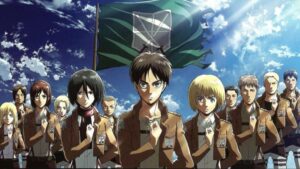 Episode 3 is largely awaited by every Attack on Titans fan, and everyone wants to know its launch date. The third Episode will be dropped mostly on January 23rd, 2022. The previous Episode left all the fans hanging too many questions, and now everyone is awaiting the third Episode.

Will Reiner be able to stop Eren from meeting Zeke? Will Mikasa know why Eren said those things to her, and Will she save Eren once again, just like in the old times? Many questions are eating up fans’ minds, but we have to wait till January 23rd. The time of the release of the Episode in different countries will be

The Second Episode ends with Gabi and Falco running towards Zeke to tell him not to scream as Falco will turn into the pure titan as he screams. There are many rumors of Eren meeting up with Zeke and summoning the titan, but as there are 16 episodes in the final season, the chances of such scenes happening are very rare.

The most probable outcome will be Zeke will scream and turn many, including Falco, into a pure titan. Then Zeke will run for his life. As shown in the trailer, Eren will also take a hideout to remain alive. We have to watch the third Episode to know for sure.

Where can we watch the Attack On Titan Season 4 Part 2 Episode 3?

If you want to watch the Third Episode live, you have to go to Crunchyroll and Funimation, as they are live hosting the screening in Japan. They will broadcast the Episode after 30 minutes of airing on Television in Japan. If you don’t have access to these sites in your country, you can go on the telegram group where you can watch the full episode.

2 thoughts on “Attack On Titan Season 4 Part 2 Episode 3 release date, Expectations, and where to watch?”