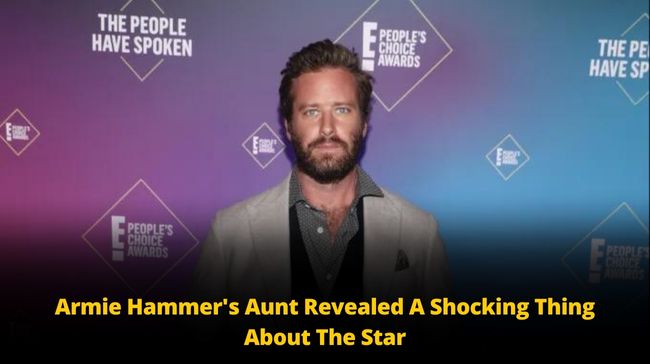 Today we are all about Armie Hammer!!!

In January 2021, A year after living in relative COVID isolation, with the name of @HouseOfEffie, an anonymous Instagram account started posting screenshots of DMs of an actor named Armie Hammer; he had sent several women in large quantities, which detailed rape and cannibalism fantasies.

So, what’s the matter? Armie Hammer’s aunt revealed a shocking incident about the star!!

What happened to the messages that went viral?

The messages which went viral prompted a number of his recent exes to come forward, which is including Courtney Vucekowich she is an entrepreneur who is accusing him of emotional damage, and Paige Lorenze, who is a college student and is accusing him that he branded her and spoke of removing and eating her one ribs.

And, the owner of the account, Effie, also accuses him that Armie Hammer raped her for four hours, prompting an LAPD investigation. And she was only 20 when he raped her. Also, Hammer has declined the allegations.

These disturbing claims have a clean cut, and they are also attractive. These claims have surfaced very much about Armie Hammer. This uninteresting Hollywood star is from an aristocratic family, and he is named after his great grandfather, the late oil tycoon Armand Hammer who has taken much by surprise. But… not his Aunt Casey.

Casey Hammer replied to Daily Beast that she was not shocked by the allegations. She said that based on my experiences, my family and I suffered from abuse. It is just a way to live life. One Day you do not wake up, and you become a monster. Our behavior learns it.

Once the allegations started coming forward, she said, here we go, another Hammerman, and something is being said about them.

Media’s Coverage Regarding the allegations on Armie Hammer!

The media’s coverage of the allegations which started unfolding is against the Social Network and Call Me By Your Name star, which left us now taken aback.

The focus seemed to be on Armie Hammer being a cannibal. Now, what was going to happen to his career or cancel culture? She’s like, wait a minute, now let me shift the focus towards the victims. Do people that are scarred for life because of all this happen?

The House of Hammer – A Documentary

This is precisely what Casey is hoping for from the House Of Hammer; It is a Three part documentary that will be premiering on the 2nd of September on Discovery+. While this show opens with the allegations against Armie, it includes sit-down interviews with a good number of alleged victims. It soon pulls back to reveal a family tree filled with all vice and crime.

It has been very shocking as what Armie Hammer is doing now; it has been a generation pattern that has been in play for a long time and of which no one took notice off; Casey explained that it just didn’t start here. It starts way back…