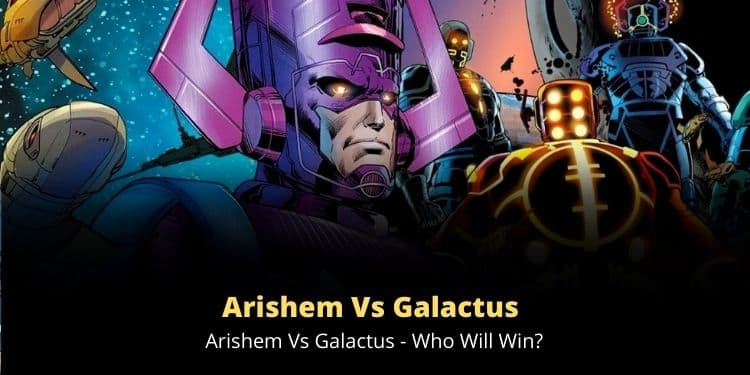 While the MCU audience has got a glimpse of Arishem the Judge in the Eternals, Galactus’s character is something still barred within the comics. However, with the two most powerful entities colliding, the fans are often curious to know – who would win in a head-to-head fight of Arishem vs Galactus?

Is Arishem more powerful than Galactus? Or Galactus will crush Arishem the Judge into pieces? Here is everything we know.

Arishem The Judge In Comics & MCU

All the Marvel fans who have watched Eternals have got a glimpse of Arishem the Judge. While Arishem’s size and appearance varied in the movie, in the comics, he is 2000 ft tall and is one of the most powerful entities.

Galactus In The Comics

Galactus is one of the most popular characters from Marvel comics. His origin story is like many other superheroes. Galactus was originally Galan, a space explorer from planet Taa, who gained immense abilities after being exposed to a star.

Galactus is insanely powerful and he is always hungry. He needs to consume planets to extinguish his hunger.

Arishem Vs Galactus – Who Will Win?

While both the characters are equally deadly in terms of powers, who would win in – Arishem vs Galactus?

Well starting with the planet eater, Galactus when fully fed is simply unstoppable. He turns out to be limitless and his powers are boundless. While on the other hand, Arishem is the creator who always triumphs.

So, in case we see Arishem vs Galactus, Arishem may dominate if Galactus is hungry. However, in case Galactus consumes two or three planets, he will be unstoppable.

So, who do you think will win in Arishem vs Galactus? Let us know in the comment section.

1 thought on “Arishem Vs Galactus – Who Will Win?”