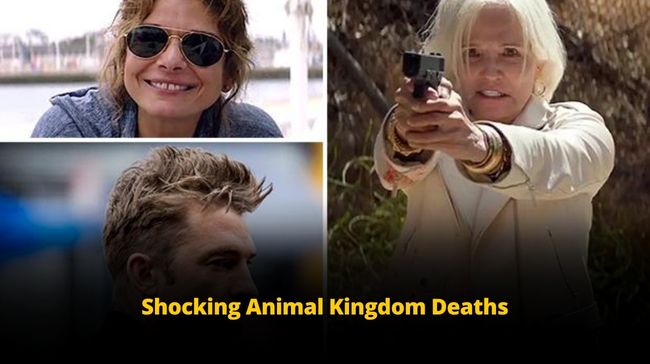 Hola!! Today we are here with a bunch of shivering deaths that stunned the Animal Kingdom lovers.

What is Animal Kingdom all about??

After his mother’s tragic death, Joshua decides to spend his life with his grandmother, who is heading a criminal troop. Life gets curvy for Joshua as he gets his hands involved in illegal activities.

The entire series, with six chapters, has been soaked in blood and has scribbled off many characters. The crime actions are touching parameters where if you stick a shovel anywhere, you might hit a dead body buried by the Codys!

With so much blood around the entire six-chapter series, we are here today to share with you the few most shocking murders in the whole series!! Though they are not the ones ranked as per their cruelty or gruesomeness, the list is made considering the sudden and horrifying situations and circumstances that resulted in these killings, AKA murders, AKA deaths!

In other words, we can say that these are the ones that made us drop our jaws on the floor rather than get tears in our eyes….

So are you ready to skim through the list of the characters whose demise made us have a ruthless look at the writers!!! Keep scrolling …..

Warning: This contains spoilers for the Sunday Finale yet to air!!

Oh, this was an absolute heartbreaker!!! Had we been preparing a list based on how churning the deaths were, the Pope’s demise would rank first.

But here we all knew after evaluating the circumstances that Pope was not going to survive the series to its finale!

Oh, to kill the woman with whom he had been in love for so long!! And that too after having sex……Absolutely horrifying!!

Simple yet poignant was the death scene of Craig, who dies from a gunshot post; he and Dean did all they could to get the money for escape!!!

Post a suspenseful summer, and in season 3’s premiere, we find out that Smurf’s surrogate son had met his end as he couldn’t survive the hit she took on him at the end of Season 2 of Animal Kingdom!

Oh, how could this happen, fans!!! We were so sure that this wouldn’t happen… This couldn’t happen. But this did happen!!!!!!! In Season 4 of Animal Kingdom!! The Death of Smurf!!!

Hey, fans… these are some of the top 5 Animal Kingdom deaths that left us shocked like forever!!!

Do share your reviews and let us know which end in the Animal Kingdom series left you shaken!!