5 Fights We Must Look For In Dragon Ball Super:...

After a long break, the Dragon Ball franchise is coming back with a blast. The latest teasers and trailers of the upcoming feature film, Dragon Ball Super: Super Hero has left the fans crazy. With a dozen fan-favorite characters returning in the movie, the fans are eager to see some much-awaited matchups.

The franchise that opened the doors of a global audience to the anime world is returning with a boom. After a super-duper anime season, Dragon Ball Super is back with a new feature film. So, with the trailer of Dragon Ball’s new movie, Super Hero passing some glimpse of the fan-favorite characters, the fans are craving to witness them back in action.

Though there are a thousand reasons to love Dragon Ball, what makes the show more adorable is the wide array of characters and their insane display of powers. While the show has showcased some phenomenal matchups among the most powerful entities, the fans are still craving to see some much-awaited face-offs in the upcoming Dragon Ball venture. So, here are the top 5 fights the fans are looking for in Dragon Ball Super: Super Hero –

5 Matchups To Look For In Dragon Ball Super: Super Hero

With the official trailer of Dragon Ball Super: Super Hero coming out, we already know that the new movie will feature Gohan as the main protagonist. After years, Gohan will take the stage with a bunch of new powers.

However, provided Gohan’s daughter Pan is now grown up and the trailer features her training, the fans are hoping to see a father and daughter duo in Dragon Ball Super: Super Hero. It will surely be a treat to watch Gohan and Pan team up to fight against the new threats Gamma 1 and Gamma 2.

Broly Vs Beerus Showdown Will Drive The Fans Crazy

With the first Dragon Ball Super movie, Broly is officially canon now. So, as we saw a deadly encounter between Goku and Beerus, in the Dragon Ball Z: Battle of Gods series, a face-off between Broly and Beerus is a must.

Moreover, the new movie is going to feature the Legendary Super Saiyan, back in action. Though Beerus is surely above Broly’s current power levels, witnessing Broly climb the ladder of power during a fight with the God of Destruction will be insane.

Teen Gotenks Against Kefla Will Be A Treat To Watch

When it comes to the most iconic fusion characters of Dragon Ball, Kefla and Gotenks, no doubt stand out as the best. While in Dragon Ball Super, for the first time ever we saw two female Super Saiyans from Universe 7 fusing, Goten and Trunks’ fusion is famous in the franchise.

Though Kefla initially overpowered Goku, it will surely be a treat to watch Gotenks matchup with the Universe 6 Saiyan to explore the depths of his powers. 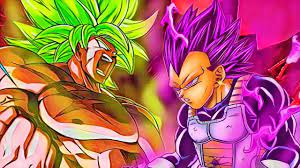 So, with Dragon Ball Super: Super Hero coming with a time jump and Vegeta has already unlocked his new transformation, Ultra Ego in the mangas. So, we can expect a deadly battle between Vegeta in his new form and Broly.

Pan & Piccolo Will Team Up To Fight The Evil

Dragon Ball Super: Super Hero is something out-of-the-box has it stresses on other Dragon Ball characters, keeping aside Goku supremacy. The trailer indicates a thrilling story surrounding Piccolo and Gohan’s daughter, Pan.

So, it may be possible that just like her father Pan will also train under the shade of the Namekian, Piccolo. Therefore, we will most likely see a Piccolo and Pan team up against the evils.

Which matchup are you excited about in Dragon Ball Super: Super Hero? Tell us in the comment section.