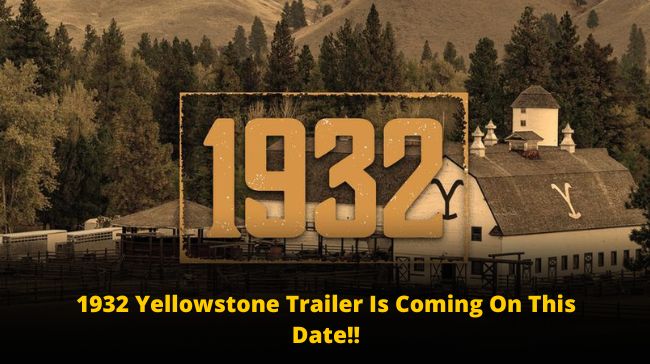 If you are a die-hard Yellowstone fan who has been watching every single episode from the franchise, we know you are craving for the 1932 Yellowstone trailer. We definitely understand your thirst for new updates on the upcoming Yellowstone prequel. So, Sassyshows is here with a glass full of updates. Hence, without any further ado, let’s pour it on our lovely readers.

Do you love Yellowstone? Well, we know you do!! How can someone not love the show that has anything and everything the fans crave for. It delivers a super interesting plot that is loaded with creativity and connects with the audience. It elaborates on a modern story, but the show also has some traditional and historical aspects that keep the fans hooked up.

Yellowstone is also loaded with a bunch of strong characters and unique personalities. While the setting of the show in the heart of Montana also impresses the fans, they are currently more interested in the upcoming Yellowstone prequel series, 1932. The fans are counting the days for the 1932 Yellowstone trailer’s release. So, when is the trailer coming? What to expect? Here are all the answers.

1932 Yellowstone Trailer Will Change Everything!!

Well, till date, no other Paramount show has touched the level of popularity as Yellowstone. However, one show that comes close to Dutton’s show also comes from the same universe. Yes! You guessed it right, it’s Yellowstone prequel, 1883.

Since the show left the fans a few months ago, they are not over it yet. They are evaluating how good the show was. To the fans and also the critics, 1883 was one of the best releases of 2021. Naturally, the immense success of Yellowstone 1883 left every fan craving for season 2.

However, it seems that the series will not get its second season. Instead, the fans will get one more mini-series that will take place after a few decades following the events of 1883. The title of his brand new Yellowstone prequel is announced to be 1932 and the fans have high hopes from it. As per the latest leaks, the brand new prequel will change everything in the Yellowstone Universe. 1883 showcased the struggles of the Dutton and gave a clear picture of their family logic. In the climax, Dutton settled in Montana. However, at the cost of Elsa Dutton, the main protagonist. We believe the loss of Elsa will be the backbone of the 1932 series.

The new 1932 Yellowstone trailer will most likely reveal the brother of Elsa, John Dutton Sr., as the main protagonist of the series. He will likely make the loss of his sister a personality trait since it wrecked his lovely childhood. That’s why we are expecting a strong personality from John. He will most likely impress all the fans with his screen presence. We also believe that Elsa’s death will make him a furious businessman and a heartless person. Well, as of now the creators have not yet dropped the arrival date of the 1932 trailer. But we believe Taylor Sheridan will drop something exclusive in the upcoming months. So, stay tuned for all updates.

Read More – Yellowstone 1932 Series Will Be The Best Prequel Ever… Here’s Why!!