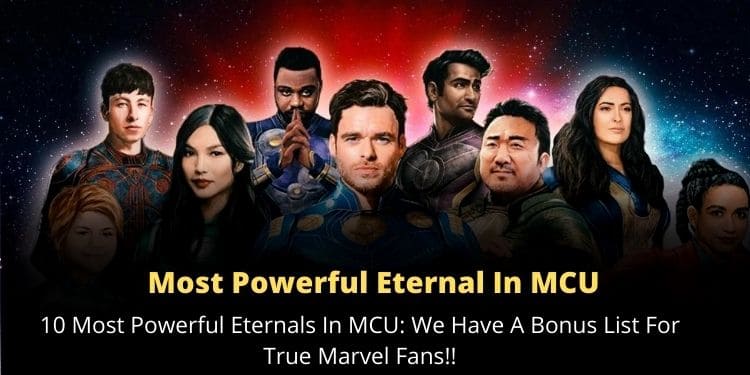 Eternals has left a mark on the lives of every true Marvel fan. If you are wondering who is the most powerful Eternal in MCU? You are at the right place as Sassyshows has presented a detailed analysis of the powers of all Eternals below –

When Marvel decided to make a film based on the mysterious Guardians of the Galaxy, they took a risk. However, it became one of Marvel’s most successful series because of the superb director James Gunn and a wonderful ensemble that worked well together. They have attempted to do it again in 2020 with The Eternals, a lesser-known series set in the vast realm.

The Eternals are the Celestials’ “children,” who came to Earth one million years ago to execute proto-humanity tests. The Celestials would subsequently use these experiments to produce the humanoid Eternals and their hideous opposites, the Deviants.

There have been hundreds of Eternals over Marvel’s vast history, some are more powerful than others, and here we have presented a list of the top 10 most powerful Eternals we have ever seen.

Who Is The Strongest Eternal In MCU?

Here are the most powerful Eternals in MCU –

The Eternals’ former commander was also their most powerful eternal at one point. While Ajak’s abilities were not sufficiently developed in the film, we do know that she could communicate with the Celestials. And she used her healing talents to keep her immortal family safe for millennia. She was also recognized for assisting in destroying hundreds of planets to make them suitable for the Emerging Celestials. So she was wielding some type of deadly cosmic abilities at the time. Unfortunately, although her fellow Eternals made her stronger at times, she eventually faced downfall later. However, she created a lasting impression by appointing Sersi as the new head.

Sprite was born many years ago in Olympia, the Eternals’ homeland; his oddity is that he has the look of an eleven-year-old kid, a feature that will stay with him throughout his lifetime, plaguing him with misery.

Sprite wishes to look like an adult, but the fellow Eternals do not accept him like that; for example, the lovely Sersi, with whom he is in love, rejects him only because of his looks.

Sprite has all of the Eternals’ common abilities: immortality, superior strength, and speed (even if he does not utilize them). Sprite is also a shaper; he is an Eternal with a powerful capacity to mold matter, allowing him to quickly transform items or living people.

The youngster also could create illusions that are strong enough to fool even the most powerful Eternal; this skill, bolstered by Tiamut’s Uni-Mind, enabled him to change reality at will.

Kingo is certainly the most favorite figure to fans. Kumail Nanjiani creates a delightful, humorous, and colorful hero in the somber universe of Eternals. He also possesses exceptional powers, which is kind of funny as well: finger guns. He can fire energy balls from his fingertips. He can also summon Hadouken-style power blasts on occasion. However, it is very helpful when considering the overall picture of the fight.

Phastos is a mind-bogglingly clever technopath who can envision and build any machine. Not only does his technology affect human progress in the MCU, but he also invented the Uni-Mind, which enabled the Eternals to unite as one. We would love to see what Phastos might come up with to help coordinate the expanding multiverse. If he had fought Thanos, he would have no doubt been able to create a gauntlet to match the Mad Titans’. He is a tremendous force to be reckoned with because of his capacity to build practically anything with the strength of his thoughts and gather almost every most powerful Eternal on Earth.

Sersi is one of the most powerful Eternal. Sersi’s capacity to transmute matter makes her one of the Eternals’ most powerful members. She can accomplish this on a scale that has not been graphed before, and her abilities may even equal those of the Scarlet Witch. Sersi has the ability to rearrange matter at the atomic level.

Sersi’s ability was thought to be magical for most of her early comic book existence, although this is not the case. She is a fourth-generation Eternal born in the distant past, most likely after the Celestials sank Atlantis.

Speedsters are always massively outclassed. Based on their skill set, they can accomplish anything from shifting time to halt an event before it occurs. Makkari is extraordinarily quick, but she is not good enough till now. On the other hand, her quickness is a valuable addition to the squad, and we have seen her preventing more than one tragic incident. Though she may be underappreciated when compared to the others, we believe her quick abilities place her comfortably in the top five of the most powerful Eternal list.

Don Lee plays Gilgamesh in the MCU Eternals film. Gilgamesh, also known as “The Forgotten One” in Marvel Comics, is one of the Eternals’ toughest and most enduring warriors. While Gilgamesh may not have a large following, he is the Eternals’ counterpart of Thor, which gives him considerable power.

Gilgamesh is the Eternals’ strongest physical being, capable of lifting over 100 tons with ease. He is the most powerful Eternal of Earth; he is immortal, never ages, and impervious to most of the planet’s ailments. He also has a healing mechanism that promotes regeneration.

Druig is an Eternal who is more aggressive than Maximus (the Mad of the Inhumans). He is a power-hungry Eternal whose ideas have often resulted in the death of other Eternals. However, he was permitted to live among the Eternals for most of the time until Ikaris had had enough of Druig’s antics and launched an assault on him.

Telepathy and matter transformation are two of Druig’s most powerful abilities. He is a master manipulator who has the ability to change matter with extreme accuracy. He may also release a kind of flame that is harmful to other Eternals.

Thena is one of the most powerful Eternal members, capable of massive matter manipulation. Sersi has the ability to reorganize matter into anything she wants, whereas Thena must rely on cosmic energy to do it. She is basically a living battery, feeding on the universe’s inherent ambient energy to help her succeed in whatever she does.

Thena uses her power to shape matter for creating weapons, like her sword, which was previewed in the first teaser for the following film in a brief scene.

Although Ikaris lacks some of his friends’ psychic powers, his capacity to capture and utilize latent cosmic energy makes him tremendously strong and place him here as one of the most powerful Eternal. Ikaris has the ability to fly at incredible speeds and create energy discharges hot enough to melt metal.

His destructive capacity is unrivaled, especially when you consider his ability to teleport long distances. Due to his constant diet of cosmic energy, Ikaris is a tremendously strong warrior who is practically invulnerable and never gets tired.

The Earth Eternals’ leader is Zuras. He is a strong humanoid with an infinite lifespan, much like the other Eternals. He was also the first Eternal to begin the Uni-Mind and was formerly the only Eternal capable of doing so. As an energy manipulator, he is also excellent.

The Eternals were driven crazy by the “Final Host of Dark Celestials” entrance and revolted against one another. Regrettably, Zuras was compelled to commit suicide.

With the forthcoming Eternals comic book on the way, it seems doubtful whether Zuras will return once more time or not. Zuras, however, have vanished for the time being.

Thanos was born as a member of the “Eternals on Titan,” one of Saturn’s satellites. He is the offspring of two Eternals, A’lars and Sui-San, and possesses the Deviants gene, which causes his amazing physical features.

His mother tried to slain him since he was a menace to the cosmos, but his father intervened. As a youngster, he was a peacemaker, preferring to play with his siblings and their pets.

Later in life, he developed an interest in nihilism (the notion of death) and finally fell in love with Mistress Death, the Marvel universe’s avatar of Death.

He is immortal, with superhuman powers, speed, and endurance. Thanos is almost invulnerable, can teleport and regenerate, control matter, utilize telepathic skills, manipulate energy, and even fly. Thanos possesses extraordinary intellect, and he is a really fearsome antagonist in that regard.

The Celestials are among the most intelligent entities in the universe. They have wandered the universe for ages and experimented with the building blocks of life on numerous planets.

They formed the Eternals to fight the Deviants and preserve the Earth as mankind progressed to the point when the Celestials would evaluate their formation.

Individual Celestials have tremendous power. Their armor is practically impenetrable, and their cosmic might is beyond comprehension. Nobody knows what goes on inside these enormous minds, and their presence is so terrifying that few have the courage to face it.

We have eventually met the Eternals after long waiting, with the question of who is the strongest among all. The most powerful characters from the Marvel Cinematic Universe are presented here with their respective abilities. Hopefully, you have enjoyed the article and got the most powerful Eternal accordingly.

Do let us know, which according to you is the strongest character in Eternals. Follow us for more interesting articles. Happy Watching!!